Small, double flower, 5 cm in diameter, composed of 25-30 petals of a beautiful tender pink that fades into cream towards the center, visible yellow stamens. Reblooming, the flowers are carried in a cluster; it grows up to 50 cm in height and 40 cm in width, compact, with semi-glossy leaves. Very resistant to diseases, the Flirt 2011® can boast the ADR title won in 2011. This rose also won: in 2010 the Gold medal in the Buenos Aires competition; in 2011, in addition to ADR, it won the Baden-Baden competition and the Certificate of Merit in the competition of the Royal National Rose Society (RNRS) in 2013 was elected the best patio rose in the Belfast competition and obtained a certificate of merit in Glasgow; in 2014 a certificate of merit at the Bagatelle competition (Paris); in 2015 the Silver medal at The Hague competition. Selected by Kordes Rosen in 1999 it was introduced in 2011 in Germany as Flirt 2011® and in England as “The Hilda Ogden Rose”. 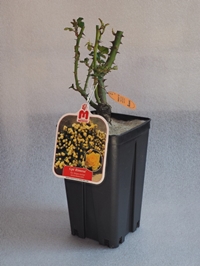